The store will not work correctly in the case when cookies are disabled.
Menu
Account
Settings
Currency
ZAR - South African Rand 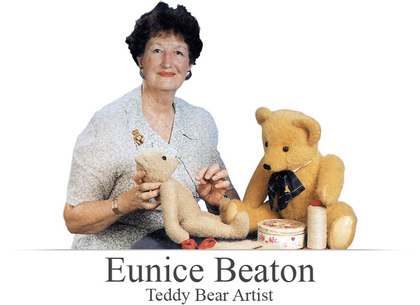 The early beginnings of Mama Bear

1984 was a momentous year. Little did Eunice Beaton realise how much her life was about to change.

It wasn’t a sudden “aha” moment, but rather a series of events that gained momentum over a period of time, each one reinforcing the next until the little bear that set the whole ball rolling grew like topsy and could no longer be contained!

The little teddy bear was inspired by a pattern in a craft magazine and Eunice was challenged to make the teddy bear. That was it — the teddy bear ‘bug’ had bitten and, of course, there was no known cure.

Bear after bear was designed, stitched, completed and each one soon found a new home. She was intrigued by the reaction that her bears elicited and the fact that the most enduring of all toys, the teddy bear, continued to enchant people of all ages. 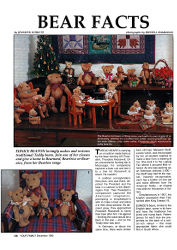 “I’d just retired from the hospitality industry and, wanting something to do, found a pattern in a magazine. I made a very silly looking bear, but it was as simple as that. I didn’t go looking for the business, but it found me — back in 1984. From the interest I’d drummed up after displaying a few of my bears at a local Quilt Show, I set up a small craft studio to teach others how to make bears,” states Eunice, adding that “enthusiasm drove me. I fell in love with teaching of this craft.”

Being the entrepreneur she is, it didn’t end there, and in 1992 her love of teaching and sharing her knowledge evolved into launching a range of bears in kit form. “My idea was publicised in Your Family magazine and my market soon multiplied — reaching even women who live in the countryside.”

Eunice explains that, back then, the fabric used was a Cape cotton-rich velour — and the Bearton range of kits were produced in three sizes, daddy Bearnard, mommy Beatrice and baby Bearnice.

It was during a holiday to the UK in 1993, especially to attend the Stratford-upon-Avon Bear Fair, that blasted her boundaries into orbit. “I was the first entrepreneur to bring mohair for teddy bears back to South Africa, together with traditional hand-blown glass teddy eyes. You can’t imagine the excitement for me finding this material.”

Eunice and Di hosted their first Bear Fair in December 1993 in South Africa and ran this annually for 15 years. “We started it to give my pupils and other bearmakers a platform to display their bears and it developed a massive following.” To the point where it overrode the need for just a stage and required a firm footing, motivating her to open a shop dedicated to the making, restoring and adoration of bears.

Her dream, in 1984, of one day opening a specialist teddy bear shop became a reality ten years later when, in 1994, Durban's first teddy bear shop, Thread Bears, The Home of Traditional Bears, opened its doors in to bear lovers and bear makers and her daughter, Di, joined her in this venture.

Situated between a row of small shops in Gordon Road in Durban (just off Florida Road), in the leafy suburb of Morningside, Durban, South Africa, Thread Bears represented the culmination of years of hard work and the realisation, at last, of Eunice's dream.

The teaching of teddy bear making blossomed, Eunice quite proudly states. It was a warm and loving home for Mama Bear, her protégées and her clientele and was always busy. “As much as I love bears and love to bring them alive, one of my greatest joys is seeing a passionate person designing their own bear, giving it their own personality and expression.”

With the explosion of hand-crafted teddy bear artists during this era, Thread Bears realised the importance of stocking top quality mohair for these special bears, and in 1997 they became the sole distributors for Schulte mohair from Germany.

But, she does admit, that another love of hers that kept her busy inbetween classes was the restoration of old bears. Whilst not many bearmakers liked to tackle this task, there was always a demand for breathing new life into those well-loved bears of yesteryear. 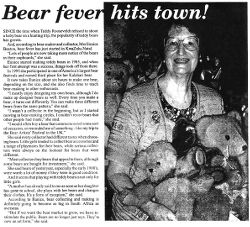 In 2002, Thread Bears in Gordon Road had outgrown its space, so a move was made to a charming 1927 cottage in Florida Road, which has been the loving home to Eunice, Di and their treasured teddies ever since.

Aligned to evolving technology and design, Thread Bears changed its name to Teddytech, and became known as the place “Where the magic of bear making begins...”

With hundreds of teddy bear kits and patterns designed exclusively by Eunice and Di — as well as a large assortment of Steiff-Schulte Mohair and bear making supplies — enthusiastic bear makers were, during the last 22 years, able to find plenty of items to enhance their bear making experience.

With Eunice retiring, sadly the doors will be closing at the charming little house at 49 Florida Road, although Teddytech itself will continue to be your favourite online bearmaking supply store and looks forward to continuing being of service and assistance to bearmakers in South Africa and beyond its borders.

But time moves on, and so must Mama Bear...

Back to Mama Bear

The lady with the special place in her heart for bears has her own collection with each one having a particular memory attached to it.

“Many of the bear designs represent the people I know, based on their different traits. My own children have each chosen one of my heirloom bears and each of my grandchildren and great grandchildren has a special bear named just for them.” What an incredible legacy...

Although the well-loved Mama Bear is retiring, her legend lives on — just like it did a century after the incredible story of Theodore “Teddy” Roosevelt. And, like the legacy that Teddy left the world, Eunice wants to leave behind a divine tribute of her passion to like-minded people — a series of limited edition Mopani Wild Silk Bears, especially created with the unique Mopani worm silk, and manufactured for her after she’d captured the imagination of CSIR researchers about the romance of the bears.

“This is the project I planned for my retirement,” enthuses the lady who naturally brings these ever-adorable toys to life. “No other similar silk fabric used for making teddy bears has been made from Mopani worms, but after the invaluable assistance of a researchers at the CSIR, I developed a few yarns of the special material to make my bears. It’s some of this incredible unique material that I have hoarded that will be used to make up these ‘retirement’ silk bears.”

Mopani silk is derived from the cocoon of an indigenous moth that’s found in countries like Zimbabwe, Zambia, Botswana, South Africa, Namibia and Malawi. Eunice's teddies made from this woven and brushed fabric will be named Mopani Wild Silk Bears.

These will be first (and only!) editions, some of which will incorporate a design/cultural element of the numerous tribes of South Africa. Each limited edition range will be sold online internationally.

You can find Eunice's bears on her website at Idle Bears.